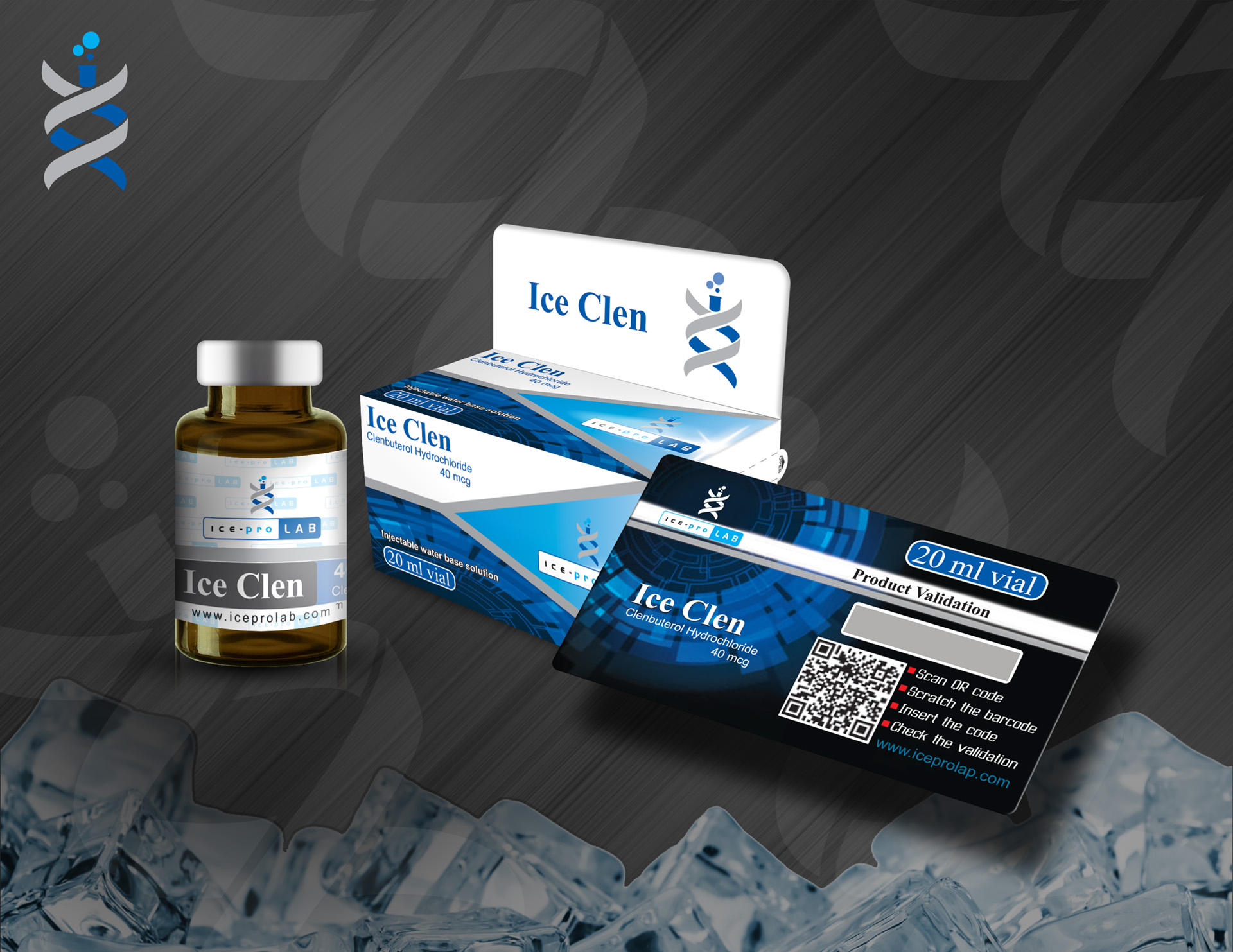 Clenbuterol is a β2 agonist with some structural and pharmacological similarities to epinephrine and salbutamol, but its effects are more potent and longer-lasting as a stimulant and thermogenic drug.[citation needed] It is commonly used for smooth muscle-relaxant properties as a bronchodilator and tocolytic.

It is classified by the World Anti-Doping Agency as an anabolic agent, not as a β2 agonist.

Clenbuterol is prescribed for treatment of respiratory diseases for horses, and as an obstetrical aid in cattle.It is illegal in some countries to use in livestock used for food.

Clenbuterol Hydrochloride is a sympathomimetic that works on the sympathomimetic nervous system. There are several receptors in the body a sympathomimetic can act on. In the case of Clenbuterol, the beta-2 receptor is the area of interest and action. Clen, as it’s commonly known, actively stimulates the beta-2 receptor. Through such stimulation, this actively reverses airway obstructions and provides improved breathing for those who need it. This same stimulation can also be used to enhance the metabolic rate of the individual. Clenbuterol does not actively burn fat by attacking fat cells, but rather stimulates the metabolism by increasing the body’s temperature. This occurs due to the beta-2 stimulation stimulating the mitochondria of the cells to produce and release more heat. In turn, this heats up the body’s temperature (slightly), enhances the metabolism and causes the individual to burn body fat at a greater rate. In reality, the functions and traits of Clenbuterol are very simple and very straightforward.

Clenbuterol has also been noted for having a strong anabolic effect; however, things are not quite like they appear. Due to the potential anabolic effect, this has caused many to use the compound in hopes of gaining lean tissue. Commonly, many steroid users have used it as an anabolic protective agent during their post cycle therapy (PCT). There is, however, a problem with this type of use; it doesn’t work. Studies have shown that Clenbuterol has the ability to promote anabolic activity in animals. There have been several studies that have shown the anabolic activity of rats to increase when Clen is administered. However, there is no data that supports such anabolic activity provided when used by human beings. In fact, it has generally been proven useless in this regard as it pertains to human beings. When it comes to human Clenbuterol use, use as a bronchodilator and thermogenic are the only suitable purposes.

The effects of Clenbuterol on the asthmatic patient are as straightforward as can be. Use of the bronchodilator opens up the airways and enables the individual to breath. There are other breathing disorders that can benefit from Clenbuterol use, but asthma appears to be primary, and it is often a welcomed medication to those who suffer. This same improved breathing could also prove useful to some athletes, especially those who can benefit from enhanced cardiovascular endurance. However, we’re not talking about a strong, notable improvement and there are truly other methods that are far more suited for increasing cardiovascular endurance.

As a thermogenic, the effects of Clenbuterol are again very simple. As the body temperature increases, which again is due to the beta-2 stimulation, the individual is now able to burn calories at an enhanced rate. Body temperature goes up, the metabolism is enhanced, fat cells are stimulated due to the increase in temperature due to the now enhanced metabolism, the breakdown of triglycerides is now enhanced and fat loss occurs. It’s hard to get any simpler than that.

While Clenbuterol is a powerful fat loss agent, it is not magical and will not make a fat physique lean on its own. You still have to diet in order to lose body fat, and if you don’t, no fat loss will occur. In fact, even if you’re using Clenbuterol you will still find you need to diet just as hard as you would without it if you are going to lose body fat. This raises an important question; why use Clen? The idea behind Clenbuterol use as a thermogenic in simple terms it to take what you’re already doing right and to simply do it a little better. It’s not going to melt fat off your frame, but it can rev up the metabolism and help you burn fat at a more effective and efficient rate. If you are obese or at least significantly overweight, your best bet is to forgo Clenbuterol use until you are at least a little leaner. The best time to use Clen is once you’re already fairly lean in an effort to help you rid that last little body fat that often hangs on for dear life. When we dive into the side effects of Clenbuterol, we will find Clen can and should only be used for a set period of time, and it only makes sense to use it when it will be the most beneficial.

Due to Clenbuterol being best served for final touches in a fat loss plan, this is why you’ll see it in many physique based plans such as bodybuilding, figure, fitness or other related endeavors. It’s commonly used the last 8-10 weeks leading up to a competition, sometimes a little longer, but regardless of the specific time frame the individual is normally already fairly lean. For the average gym rat, one who doesn’t compete but is looking to lean out, we can make some slight exceptions. We’re not saying you have to be contest ready lean in order for their to be a benefit. If you’re already in fairly good shape and looking to lean out a little more, absolutely, Clenbuterol can prove useful. But if you truly have a lot of body fat to lose, you’ll be best served by waiting until your body fat is a little more under control

There are several possible side effects to Clenbuterol use, and the primary will surround its stimulating nature. No surprise, after all, Clen is a stimulant. The side effects of Clenbuterol can be very strong and often very annoying to say the least, and they will generally affect most people in one way or another. The most common side effects surround a jittery or wired feeling, shaky hands and increased sweating. Most all who use Clen will experience such effects to a degree, but they will commonly be very pronounced during the early stages of use. As the individual becomes accustomed to the stimulant, such related effects should begin to subside, but they will be so strong in some people that some will not be able to use it.

When using Clenbuterol, many often inaccurately assume that when the stimulating effects of Clen began to fade that the thermogenic effects are no longer working. Most will find that the stimulating effects will greatly subside after a week or so of use, but assuming the fat burning properties have vanished due to this lessened stimulation is highly inaccurate. The same dose of Clenbuterol Hydrochloride can actually keep the metabolism revved for as much as five weeks. Granted, by the fifth week mark it will be minimal as the body does most certainly adapt. Due to the body’s ability to adapt, necessarily adjustments must be made to use. We will go over adjustments, dosing plans and total plans of use in the Clenbuterol in the administration section.

The aforementioned side effects of Clenbuterol are the most common, but there are other possible effects of note. As with many stimulating substances, some will experience headaches as well as possible nausea. One of the more bothersome possible side effects of Clenbuterol Hydrochloride will be muscle cramps. Cramps are not exceedingly common, but they will affect many people. Athletes are often at the greatest risk due to the hard and often intense training they are already undertaking. Staying well hydrated is often enough to avoid or remedy this problem, but supplementing with taurine can also help. Clen has been shown to deplete taurine, so supplementation may be necessary for some. Some may also have issues with insomnia; in fact, some may find sleep becomes extremely difficult. Again, this is very common with many stimulating substances, but with Clen it can, for some, be impossible to avoid. Clen has an active half-life that stretches to the 34 hour mark, and that can make sleep impossible for some people. Many will, however, find if they take their Clen first thing in the morning they will not have any issues with sleep, but due to the long half-life some will find insomnia occurs regardless of when they take it.

The use of Clenbuterol Hydrochloride also carries with it possible side effects that can be severe; in fact, dangerous would be a more accurate description. Such effects are most commonly associated with abuse through high doses and far beyond recommended extended periods of use. The severe side effects of Clenbuterol include high blood pressure, irregular heartbeat, trembling and even panic. Some studies have also shown that Clenbuterol abuse can also lead to cardiac hypertrophy, which could potentially lead to death. It is very possible to use this compound without such effects, but as with so many things in life it will require responsible use and a thorough understanding of Clen.

In a therapeutic setting, Clenbuterol doses will most commonly be 20mcg per day, with some requiring 40mcg per day. It is possible for some to need even more, but it is rare and generally only for a short period of time. This should, in most all cases, be enough Clen to correct related breathing issues, if not, alternative treatments may be needed.

In a performance setting as a thermogenic, Clenbuterol doses will start low and generally increase overtime due to a down regulation of the beta-receptor. Most men will find starting at 40mcg per day to be perfect. Many women may also be fine with this starting dose, but many will be far more comfortable with a starting dose of 20mcg per day. As the body adapts, the dose will need to increase in order to maintain the full fat loss benefits. There are several schools of thought on the best way to use Clen in a fat burning setting, but there are only three that really make any sense. All three will work very well, but you may need to try all three at separate times to find which one works best for you.

Use or as directed by the physician.