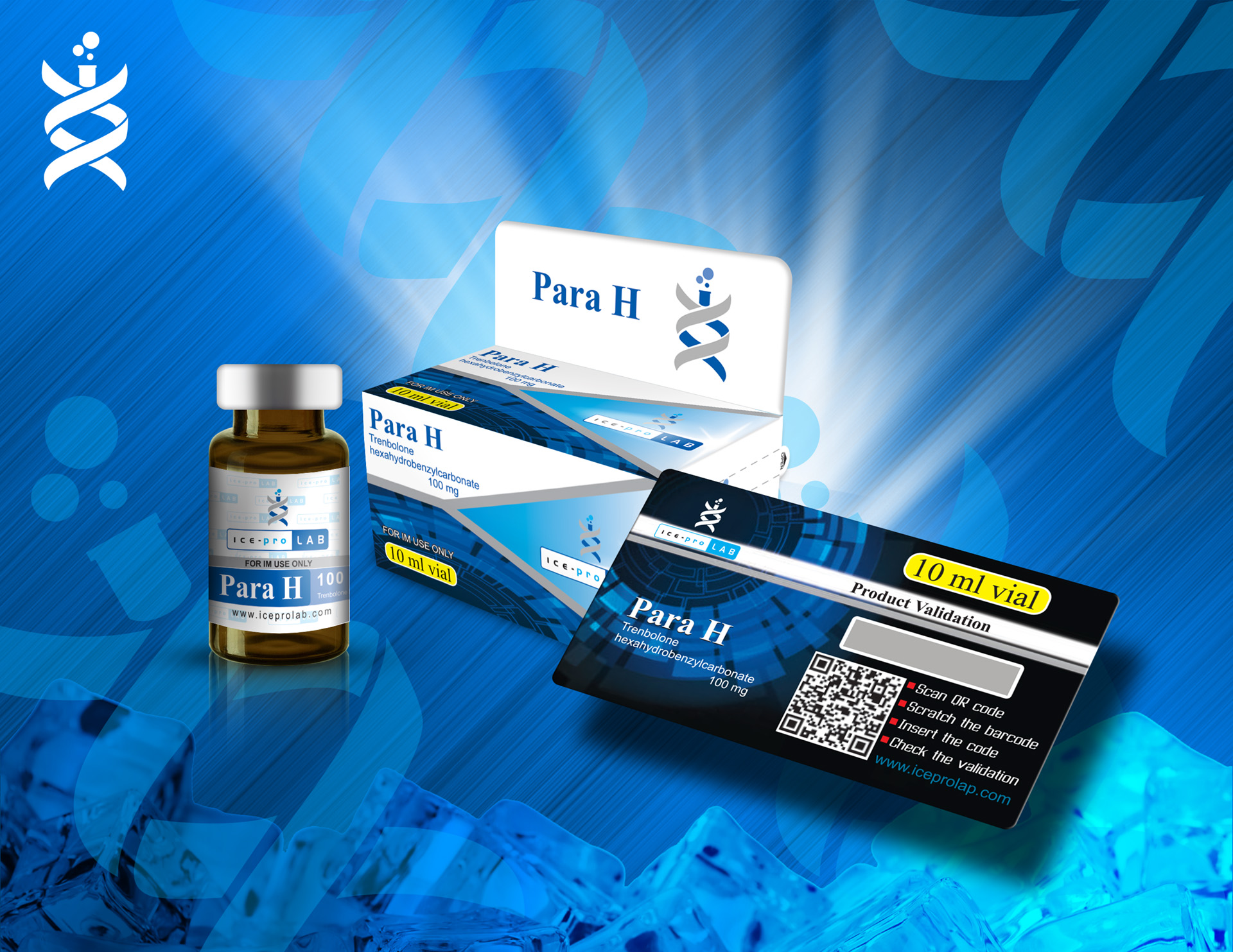 Trenbolone hexahydrobenzylcarbonate 100 mg in oil base

It was introduced in France in 1980 and was voluntarily discontinued by its manufacturer in 1997.The drug acts as a long-lasting prodrug of trenbolone when administered via intramuscular injection.

Parabolan, officially labeled Trenbolone Hexahydrobenzylcarbonate is a structurally altered form of Nandrolone. Nandrolone being the hormone most commonly associated with Deca Durabolin (Nandrolone Decanoate). For the Trenbolone hormone to exist, the Nandrolone hormone has an added double bond at carbon positions 9 and 11. This greatly increases the hormones androgen binding affinity and inhibits the hormone from aromatizing. Parabolan carries no aromatizing nature. This slight modification also slows down the metabolism of the hormone resulting in a far more potent anabolic and androgenic nature than Nandrolone, far beyond testosterone as well. In order to understand this hormone’s power, consider its anabolic and androgenic ratings. Trenbolone carries an anabolic rating of 500 as well as an androgenic rating of 500. All steroids carry a rating measured against the rating of testosterone, which carries a rating of 100 in both categories. More importantly, the Trenbolone hormone’s ratings match up perfectly to its translating activity. This is not always the case as can be seen in steroids like Halotestin (Fluoxymesterone) and Proviron (Mesterolone) to name a few. You will be hard pressed to find an anabolic steroid that carries the raw anabolic and androgenic power of Parabolan.

As an anabolic steroid, Parabolan carries with it numerous common steroidal traits associated with anabolic power. Many of these traits are shared by many other anabolic steroids, but in the case of the Trenbolone hormone it carries them with a far greater rate of power. This steroid has the ability to enhance protein synthesis and nitrogen retention in the muscles far more so than most steroids. This is important as protein synthesis refers to the rate by-which cells build proteins. As proteins are the building blocks of muscle, this promotes a potent anabolic atmosphere. The enhanced rate of nitrogen retention again promotes this atmosphere and protects the body from catabolism. All lean muscle tissue is comprised of approximately 16% nitrogen and a deficiency will lead to a catabolic state.

Parabolan also has the ability to greatly increase red blood cell count and IGF-1 output. The increased red blood cell count is important as red blood cells are responsible for carrying oxygen to and through the blood. This not only promotes greater muscular endurance, but again revs up the total anabolic activity. When it comes to anabolic activity, this is precisely why the increased presence of IGF-1 is important. IGF-1 is a powerfully potent anabolic hormone that affects nearly every cell in the human body. This simple hormone also plays a tremendous role on our body’s recovery process.

The Trenbolone hormone is also well noted for being one of the best inhibitors of glucocorticoid hormones or stress hormones like cortisol. These hormones are in many ways the complete opposite of anabolic steroids in that they destroy muscle tissue and promote fat storage. With this trait, along with the insanely potent anabolic atmosphere, the individual should find a greatly enhanced metabolic rate. However, he should also find steroids like Parabolan also have the ability to directly promote lipolysis due to its tremendous binding affinity for the androgen receptor. Most all anabolic steroids can promote an enhanced metabolic rate, but very few tend to support direct fat loss and Parabolan tends to promote it at a notable rate.

All of the mentioned traits make Parabolan a remarkable anabolic steroid, but it carries another that truly separates the Trenbolone hormone from the rest of the pack. This anabolic steroid has the ability to remarkably increase feed efficiency or nutrient efficiency. This is the very reason Fina pellets are administered to cattle shortly before slaughter in order to beef them up for a higher return on the market. By increasing feed efficiency, this makes every last nutrient more valuable than it would be otherwise. Every gram of protein, fats and carbohydrates we consume is utilized at a higher rate, less is wasted and a greater benefit is gained. A good way to look at it is as you would the money in your pocket. Imagine being able to buy ten dollars worth of goods and services with every one-dollar you have. Perhaps a slight oversimplification, but it’s not that far off.

Parabolan is not what we’d call the most side effect friendly anabolic steroid. Side effects of Parabolan are undoubtedly possible, but they are often blown way out of proportion. This is a common practice by those who hold to an anti-steroid sentiment, but in the case of the side effects of Parabolan it’s often steroid users who are the biggest offenders. This steroid will carry some very common possible steroid side effects. However, it will also carry a few that while possible tend to be a bit unique to the Trenbolone hormone. Such effects are highly dependent on response. Dose can play a role but response is the primary factor. Because these effects will be pronounced strongly many have begun to inaccurately assume that their Trenbolone is no good if such effects do not occur. This is an insane way of thinking. Others assume the steroid should not be used unless you have years of anabolic steroid experience. Again, this is insane thinking. If you are a poor responder you’ll be a poor responder in your first year of steroid use or your twentieth. In order to understand the side effects of Parabolan, we have separated them into their respected categories along with everything you need to know.

Parabolan does not aromatize and carries no estrogenic activity. However, estrogenic side effects are still possible with this steroid due to a strong progestin nature. Water retention will not be a concern, but gynecomastia will be possible in some men depending on sensitivity. While there is no estrogenic activity, progesterone has the ability to simulate the estrogenic mechanism in the mammary tissue leading to gynecomastia. In order to protect from such action, some men may need an anti-estrogen medication, but many will be fine without it. Again, sensitivity will be the primary issue.

The Trenbolone hormone is highly androgenic, and as a result, the side effects of Parabolan can include strong related effects. Such side effects of Parabolan include acne, accelerated hair loss in those predisposed to male pattern baldness and body hair growth. Such effects will be linked to genetic predispositions but they are quite possible in many men who use the hormone. To combat such side effects, some will be tempted to use a 5-alpha reductase inhibitor. However, the Trenbolone hormone is not metabolized by the 5-alpha reductase enzyme and related inhibitors will have no notable affect in reducing the androgenicity of the hormone.

Due to the androgenic nature of Parabolan, virilization symptoms are very possible when women supplement with this steroid. Virilization symptoms can include body hair growth, a deepening of the vocal chords and clitoral enlargement. Most women who use this steroid will experience such symptoms at some level even with low doses. It is very possible to reverse such symptoms if use is discontinued at their onset, but they will often become permanent if allowed to set in. For this reason, most women are encouraged to seek out steroids with lower virilization ratings if anabolic steroids are to be used. Such compounds commonly include Anavar (Oxandrolone) and Primobolan (Methenolone) as well as Winstrol (Stanozolol) and possibly Equipoise (Boldenone Undecylenate) at low doses.

Parabolan can have a notable adverse effect on cholesterol. It’s not as strong as many anabolic steroids, especially most oral steroids but it is notable enough. High blood pressure is also possible, but cholesterol will be the primary issue. For this reason a healthy lifestyle, one that is cholesterol friendly is imperative when supplementing with the Trenbolone hormone. If you already suffer from high cholesterol or blood pressure you should not use this steroid. If you are healthy enough for use, you should ensure your diet is cholesterol friendly, low in saturated fats and simple sugars and rich in omega fatty acids. You should also ensure you include plenty of cardiovascular training into your routine. Maintaining your health is very important when using anabolic steroids and it is more than possible with this steroid, but it will take some effort on your part.

Parabolan should be administered by deep intramascular injection It is must commonly used at a dosage of (100 to 300 mg) two to three times weekly or as directed by the physician.