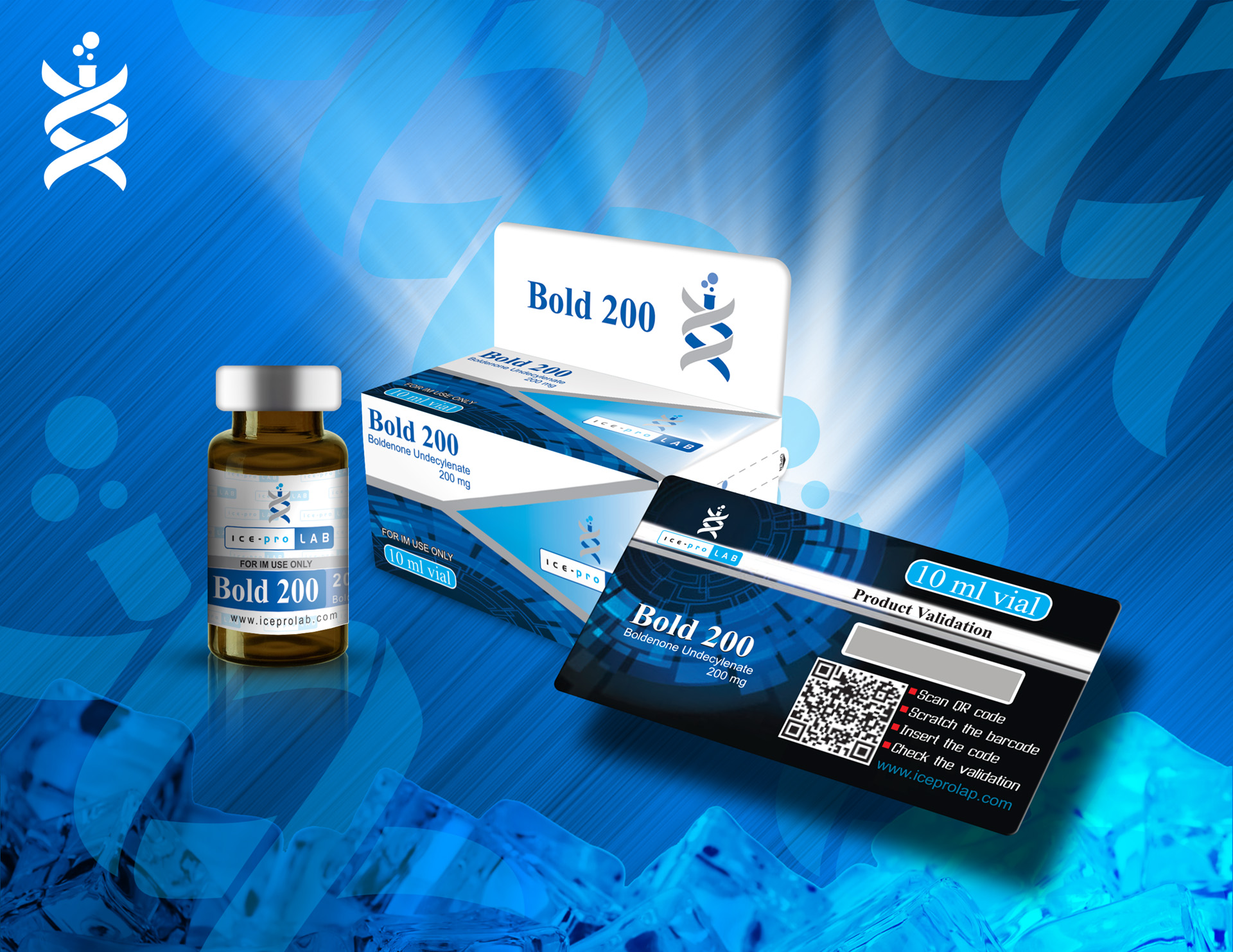 Boldenone Undecylenate 200 mg in oil base

Boldenone Undecylenate is a structurally altered form of testosterone. It is a very slight change in an added double bond at the carbon one and two position. This double bond greatly reduces the hormone’s androgenicity, as well as estrogenic nature. It is then attached to the very large or long Undecylenate ester, which is responsible for controlling the release of the hormone once administered into the body. The Undecylenate ester allows for a peak release in Boldenone approximately 3-4 days after injection, with a slow continuous release of the hormone to follow for approximately 21 days.

The effects of Equipoise are fairly straightforward. This is a generally well-tolerated anabolic steroid that presents notable anabolic activity in most users in a clean and even fashion. Outside of performance enhancement use, Boldenone did enjoy some success as a human grade steroid for a time. The steroid had some success in treating muscle wasting diseases and osteoporosis, but would ultimately give way to other steroidal options. As a veterinarian steroid, Equipoise is well-known for its use in horses, hence the name “Equipoise” and its similarity to the word “Equestrian.” EQ is often given to horses in an effort to increase lean body weight, which is in part due to the steroid’s ability to increase appetite. An increased appetite is well noted among many performance enhancing athletes that use Equipoise, however, it doesn’t appear to affect everyone the same. Many who use the anabolic steroid report no increase in appetite, it tends to be highly individualistic, but it could be useful for those struggling to consume needed calories.

As an off-season bulking steroid, Equipoise can add quality lean mass gains, but they will not come overnight, and will fall short of many anabolic steroids. Steroids like Deca Durabolin will produce far greater mass results, as will steroids like Anadrol and Dianabol; however, the latter two are often accompanied by large amounts of water retention. Some athletes have, however, reported stronger off-season gains when Equipoise is added to a total off-season stack rather than used as a base steroid. If appetite suppression is an issue, this steroid may very well help you consume the excess calories needed for off-season growth. Of course, while it may not be a tremendous mass building steroid, for some it may produce all the mass they want. Not everyone who uses anabolic steroids is looking for immense gains in size.

Equipoise is also well-noted for promoting increases in strength. An increase in strength can be very beneficial to an off-season mass plan, but perhaps more beneficial to the enhancement of athletic performance. Unfortunately, the extremely long detection time will prohibit many athletes from using EQ. Total detection time can stretch to five months. However, the steroid definitely provides numerous advantages to the athlete, not only in an increase in strength but a notable increase in muscular endurance. Recovery should also be enhanced. Regardless of the desired purpose of use, all who supplement with Equipoise will enjoy these related benefits.

boldenone can also be used as a cutting steroid; in fact, this may be the most beneficial point of use. This anabolic steroid is an excellent protectant of lean muscle mass. In order to lose body fat, you must burn more calories than you consume, you must be in a caloric deficit, and this will hold true with or without anabolic steroid use. Unfortunately, a calorie deficit puts our lean muscle tissue at risk as the body will often take what it needs in order to meet its energy demands from our lean tissue. Proper dieting can greatly protect our lean muscle mass, but it can only go so far. Without the introduction of an anabolic steroid, some muscle mass will eventually and inevitably be lost. EQ will greatly protect you from this loss in lean tissue, and it has also been shown to have some very nice conditioning effects on the physique. Such effects will be greatly enhanced when combined with a non-aromatizing steroid like Masteron (Drostanolone) or Trenbolone. However, during most cutting plans of a competitive bodybuilding nature, while EQ is commonly used it is normally only used at the frontend of the cutting cycle. It will normally be discontinued during the later half of the plan due to possible estrogenic activity. While total estrogenic activity should be low, during this phase of supplementation any and all estrogenic activity is normally avoided or at least minimized to the lowest point possible

The Boldenone hormone does not aromatize heavily, but it is aromatized to estrogen nonetheless. This is due to the testosterone hormone’s interaction with the aromatase enzyme. High levels of estrogen can prove problematic in their promotion of gynecomastia, excess water retention and high blood pressure if water retention becomes severe. Due to the moderate level of aromatizing activity, most men should find related side effects very easy to control. Moderate doses should be manageable, but many will find high doses to require added attention.

In order to combat the estrogenic side effects of Equipoise, an anti-estrogen medication is sometimes needed. Not all will need an anti-estrogen when using this steroid, but it’s always a good idea to at least have one on hand. The anti-estrogen medications you can choose include Selective Estrogen Receptor Modulators (SERM’s) like Nolvadex (Tamoxifen Citrate) and Aromatase Inhibitors (AI’s) like Arimidex (Anastrozole). AI’s will prove to be the most effective as they inhibit the aromatase process and lower total serum estrogen levels. Unfortunately, they can have a negative impact on cholesterol, which is further enhanced by the use of an aromatizing steroid. SERM’s are not as effective, but they are often enough for many men. SERM’s will not inhibit the aromatase process from occurring, but rather bind at the estrogen receptor preventing the hormone itself from binding. As an added bonus, SERM’s may actually improve cholesterol levels due to their promotion of estrogenic activity in the liver. SERM’s should be your first choice due to potential cholesterol issues AI’s if they can get the job done.

Boldenone can produce androgenic side effects such as acne, accelerated hair loss in those predisposed to male pattern baldness and body hair growth. However, the overall androgenicity of this steroid is greatly reduced due to the structural nature that creates EQ in its double bond at the carbon one and two position. Such side effects of Equipoise are still possible, but they will be strongly linked to genetic predisposition, but most will find the threshold is fairly high.

When combating the possible androgenic side effects of Equipoise, it’s important to note they are brought on by the steroid being metabolized by the 5-alpha reductase enzyme. This metabolism will reduce Boldenone to an extremely potent androgen in dihydroboldenone, far more potent than dihydrotestosterone (DHT); however, the total dihydroboldenone activity has proven to be extremely low in human beings. You will further find the androgenic nature of Boldenone will not be significantly affected by 5-alpha reductase inhibitors like Finasteride that are often used to combat the reduction to DHT.

Due to the androgenic nature of Equipoise, women may potentially experience virilization symptoms. Virilization symptoms may include body hair growth, a deepening of the vocal chords and clitoral enlargement. However, the low androgenicity will make this steroid possible to use for some women without such symptoms. At the same time, the extremely slow acting nature of the compound can make it difficult to control regarding blood levels, and alternative steroids may be preferred. Without question, individual sensitivity will dictate a lot. If Equipoise is used and virilization symptoms begin to show, use should be discontinued immediately at their onset and they will fade away. If symptoms begin to show and are ignored, the symptoms may become irreversible.

boldenone should be administered by deep intramascular injection

Store in cool dry place below 25°c.Protect from light

keep out of reach of children