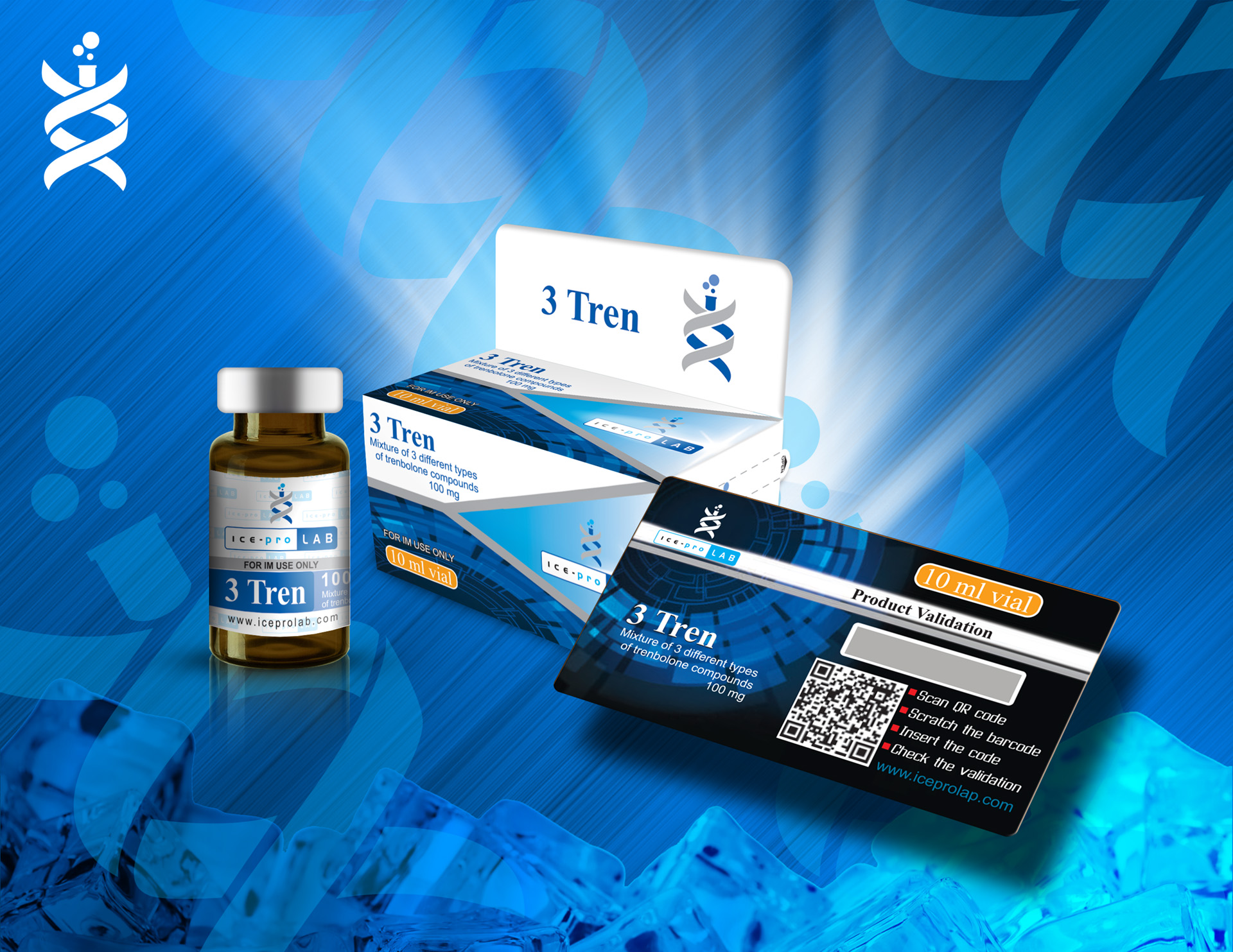 3 tren 100 is a blend of 3 trenbolone esters: acetate, enanthate and hexahydrobenzylcarbonate. One vial – three forms of the most aggressive drug ever manufactured.

Trenbolone is similar to the highly popular steroid Nandrolone, in that they are both 19-nor steroids, meaning that a testosterone molecule has been altered at the 19th position to give us a new compound. Unlike Nandrolone however Trenbolone is an excellent mass and hardening drug with the majority of gains being muscle fiber, with minimal water retention.It has an unbelievable anabolic (muscle building) score of 500. When you compare that to Testosterone, which itself is a powerful mass builder, and has an anabolic score of 100 you can begin to fathom the muscle building potential of Trenbolone. What makes Trenbolone so anabolic? Numerous factors come into play. Trenbolone greatly increases the level of the extremely anabolic hormone IGF-1 within muscle tissue . And, its worth noting that not only does it increase the levels of IGF-1 in muscle over two fold, it also causes muscle satellite cells (cells that repair damaged muscle) to be more sensitive to IGF-1 and other growth factors. The amount of DNA per muscle cell may also be significantly increased.

Trenbolone also has a very strong binding affinity to the androgen receptor (A.R), binding much more strongly than testosterone. This is important, because the stronger a steroid binds to the androgen receptor the better that steroid works at activating A.R dependent mechanisms of muscle growth. There is also strong supporting evidence that compounds which bind very tightly to the androgen receptor also aid in fat loss. Think as the receptors as locks and androgen's as different keys, with some keys (androgen's) opening (binding) the locks (receptors) much better than others. This is not to say that AR-binding is the final word on a steroids effectiveness. Anadrol doesnt have any measurable binding to the AR& and we all know how potent Anadrol is for mass-building.

Trenbolone increases nitrogen retention in muscle tissue. This is of note because nitrogen retention is a strong indicator of how anabolic a substance is. However, it's incredible mass building effects do not end there. Trenbolone has the ability to bind with the receptors of the anti-anabolic (muscle destroying) glucocorticoid hormones. This may also has the effect of inhibiting the catabolic (muscle destroying) hormone cortisol.

Trenbolone is also a highly androgenic hormone, when compared with Testosterone, which has an androgenic ratio of 100; Trenbolone's androgenic ratio is an astonishing 500. Highly androgenic steroids are appreciated for the effects they have on strength as well as changing the estrogen/androgen ratio, thus reducing water and under the skin. As if the report on Trenbolone was not good enough, it gets better; Trenbolone is extraordinarily good as a fat loss agent. One reason for this is its powerful effect on nutrient partitioning. It is a little known fact is that androgen receptors are found in fat cells as well as muscle cells, androgens act directly on the A.R in fat cells to affect fat burning.the stronger the androgen binds to the A.R, the higher the lipolytic (fat burning) effect on adipose tissue (fat). Since some steroids even increase the numbers of A.R in muscle and fat this fat loss effect would be amplified with the concurrent use of other compounds, such as Testosterone.

Trenbolone promotes red blood cell production and increases the rate of glycogen replenishment, significantly improving recovery . Like almost all steroids, it's effects are dose dependant with higher dosages having the greatest effects on body composition and strength. Mental changes are a notorious side effect of Trenbolone use , androgens increase chemicals in the brain that promote aggressive behavior, which can be beneficial for some athletes wanting to improve speed and power.

Trenbolone's chemical structure makes it resistant to the aromatize enzyme (conversion to estrogen) thus absolutely no percentage of Trenbolone will convert to estrogen. Trenbolone administration would not promote estrogenic side effects such as breast tissue growth in men (gynecomastia, bitch tits) accelerated fat gain, decline in fat break down and water retention. Trenbolone is also resistant to the 5- alpha-reductase enzyme, this enzyme reduces some steroid hormones into a more androgenic form, in this case however this does not matter. Trenbolone boasts an androgenic ratio of 500. It can easily cause adverse androgenic side effects in people who are prone to hair loss, prostate enlargement, oily skin and acne. Unfortunately Trenbolone's potential negative side effects do not end there. Trenbolone is also a noted progestin: it binds to the receptor of the female sex hormone progesterone (with about 60% of the actual strength progesterone) . In sensitive people this can lead to bloat and breast growth worse still, Trenbolone's active metabolite 17beta-trenbolone has a binding affinity to the progesterone receptor (PgR) that is actually greater than progesterone itself . No need to panic though, the anti-estrogens letrzole or fulvestrant can lower progesterone levels, and combat any progestenic sides. The use of a 19-nor compound like trenbolone also increases prolactin & . bromocriptine or cabergoline are often recommended to lower prolatin levels . Testicular atrophy (shrunken balls) may also occur; HCG used intermittently throughout a cycle can prevent this.It is also wise for Tren users to closely monitor their cholesterol levels, as well as kidney function and liver enzymes, as Tren has the potential to negatively affect all of those functions. trenbolon, being a powerful progestin, will also shut down natural testosterone production which even a relatively small dose and keep the testosterone level suppressed for an extended period of time, this can lower libido and cause erectile dysfunction (fina dick). It is essential that you always stack Finaplix with testosterone.

The acetate ester is a very short-chain ester attached to the Finaplix molecule. It has an active life of 2-3 days but to keep blood levels of trenbolone elevated and steady, daily injections are often recommended. The acetate ester provides a rapid and high concentration of the hormone which is beneficial to those seeking quick gains, coupled with a rapid clearing time the acetate ester can be discontinued on the onset of adverse side effects.

Now that the properties of Trenbolone Acetate have been explained we can better understand how to use it in order to maximize its advantages. Evidence suggests that Finaplix when stacked with estrogen promotes more weight gain that Trenbolone alone, now Im not telling you to go pop some birth control with your Tren but the addition of aromatizing orals such as Dianabol and a long estered testosterone such as Cypionate or Enanthate would produce great gains in a bulking cycle. For a cutting cycle trenbolone is the best choice you have; Trenbolone's powerful effect on nutrient shuttling allows a user to restrict calories and remain in a state of positive nitrogen balance (remember what that means?). The cortisol reducing effect and binding to the glucocorticoid receptor will greatly reduce the catabolic effects of harsh dieting and excessive amounts of cardio and not to mention that Finaplix itself may burn fat (due to its strong AR-binding). A good choice to stack with Tren in a cutting cycle is Winstrol. Winstrol has a low binding affinity to the AR and thus will act in your body in vastly different ways than the Tren (i.e. in non-receptor mediated action). In addition, Winstrol is a DHT-based drug and Tren is a 19-nor& throw in some Testosterone (prop), and you'll have a cutting cycle which takes advantage of all 3 major families of Anabolic Steroids (Testosterone, 19-nor, and DHT), as well as vastly different AR-binding affinities and mechanisms of action.

Important Note: If the individual has never used the Trenbolone hormone,Trenbolone acetate is and should always be the first choice. If issues occur it can be discontinued and the side effects will dissipate in a matter of days. If one of the larger ester base versions are used the individual may have to deal with the negative effects for several weeks after discontinuation.

Estrogenic side effects are unlikely withTrenbolone acetate. This steroid does not aromatize making water retention impossible. Gynecomastia is also unlikely in most users, but it is possible. Tren is a progestin, and progesterone can activate the mammary tissue and spur gynecomastia in sensitive men. The use of an Aromatase Inhibitor (AI) like Anastrozole (Arimidex) will protect from progestin induced gynecomastia if needed.

The androgenic side effects of Trenbolone acetate can include body hair growth, hair loss and acne. Hair loss is only possible in men who are predisposed to male pattern baldness. This means the individual was going to lose his hair with or without Tren use, but the use of Tren may cause it to occur a little sooner than it would have otherwise. Acne is also possible but normally only problematic in acne sensitive men.

Important Note: The use of 5-alpha reductase inhibitors like Finasteride will not reduce androgenicity or protect against androgenic side effects of Trenbolone acetate.

3 Tren should be administered by deep intramascular injection

Store in cool dry place below 25°c.Protect from light Keep out of reach of children